The Disaster Series by Cindy Stelmackowich 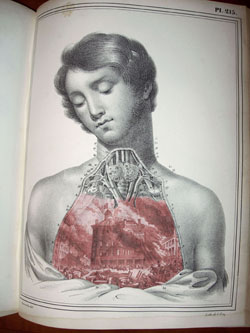 In her digital collages the Ottawa-based artist Cindy Stelmackowich merges two genres of hand-drawn graphics; the lithographs illustrating 19th-century anatomical atlases and those that enlivened 19th-century journals such as the Canadian Illustrated News. The atlases were used by surgeons, thus the internal anatomy of the cadavers is exposed. Stelmackowich inserts into the cadavers’ body cavities illustrations of shipwrecks and other disasters, then colourizes the recomposed image to suggest that the body’s routes and passages flow to and from the disaster image. The serene expressions of the immaculately coiffed and classically posed cadavers belie both the violence of dissection and the struggles raging within. By representing trauma as physically internalized, Stelmackowich restores to the medical illustrations an element formerly repressed; the sensations of fear and pain felt by the living subject of medicine.