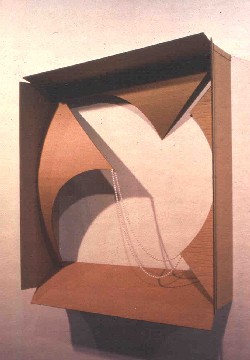 In Vancouver, where she has lived for more than twenty years, Elspeth Pratt is known for her inventive use of building supplies and her interest in leisure as it correlates with the built environment. Her works borrow from the 20th century formal vocabularies associated with constructivist and post-minimalist sculpture.

The three wall-mounted sculptures exhibited at MSVU Art Gallery come from the collection of the Art Gallery of Nova Scotia. Scar 1995, Lucky Me 1992 and Arsenic and Lace 1997 hang in a mezzanine that overlooks a major wall-painting installation by Denyse Thomasos, entitled Tracking: Bombings, Wars & Genocide, a Six Months Journey from New York to China, Vietnam, Cambodia & Indonesia.

The carceral grids and optical dynamism of Tracking offer an eye-popping counterpoint to the quasipictorial, semi-architectural posturing of Pratt’s sculptures. One writer has described their effect as evoking a “hesitant response to her contingent and ephemeral negotiation of gravity.”