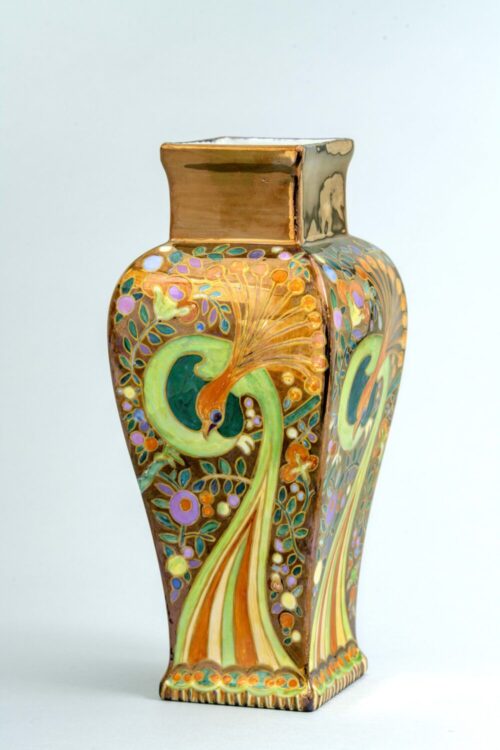 In anticipation of Mount Saint Vincent University’s 150th anniversary in 2023, MSVU Art Gallery will be displaying and documenting works from the University’s permanent collection. MSVU Art Gallery Collections Assistant, Kelsey McLaughlin, and Gallery Technician, David Dahms, will transfer select artworks from storage to the Gallery in order to photograph each piece and update collection records. The focus will be on works by Alice Egan Hagen (1872-1972), a renowned Nova Scotian ceramicist and MSVU alumna. The university’s permanent collection holds over 100 paintings and ceramics by Alice Egan Hagen, which were donated to the school by the artist in 1966.

This documentation work by Kelsey and David will take place in the Gallery, alongside a selection of paintings by Alice Egan Hagen and other artists from the permanent collection.

Alice Hagen was born in Halifax to Lieutenant-Colonel Thomas Egan and his wife Margaret. Starting in 1882, she studied at the Mount Saint Vincent Academy and later enrolled in the Victoria School of Art and Design. In the 1890s, Hagen studied with the Nova Scotia artist Bessie Brown and later with Adelaide Alsop Robineau, the American painter and potter, in New York. While she worked in both oils and watercolours, china painting was her first passion. By 1896 she had acquired a sufficient degree of fame to be 1 of 16 artists commissioned to paint a state dinner service for the Governor General. Hagen is considered to be the founder of the studio pottery movement in Nova Scotia although it was only in 1931, at the age of 60 and after a tour of Europe, that she set up her own pottery studio and kiln in Mahone Bay. She studied with Robert Prescott, a potter located in Lantz, Nova Scotia, and began to work with local clays. She remained an active potter into her 90s.