Alice Egan Hagen, an alumna of Mount Saint Vincent Academy, is considered a pioneer of studio pottery in Nova Scotia. She was in her early sixties when, in 1931, she decided to learn to make pottery so as to teach it to others. Soon she had set up kilns at several locales and was conducting pottery classes. She continued to sell pottery from her home in Mahone Bay well after her ninetieth birthday.

In the early 20th century, women who actively pursued education and professional careers were referred to as “New Women”. Alice Hagen fits this description: she financed her education as a china painter and made her living in this profession before transforming herself into a self-taught potter. Her contemporaries, Helen Creighton, the Nova Scotian folklorist, and Mary Black, the Nova Scotian craft promoter, were also “New Women”. All three of these entrepreneurial women shaped the cultural profile of Nova Scotia as we know it today.

This exhibition presents four china vessels painted by Alice Egan Hagen around the turn of the nineteenth century. Three of the items have been selected from the large collection she donated to the University in 1966.

When the young Alice Egan began to study the art in Halifax in the 1890s, china painting was one the few occupations regarded as suitable for respectable women. (Some of the other approved occupations were dress-making, teaching school, and running boarding houses.) Egan enjoyed an international reputation for china painting and received several major commissions, besides keeping up a flourishing teaching practice.

China painting is the hand decoration of commercially manufactured blank forms which have already been fired with a clear glaze. The china painter applies low-fire overglaze colours and fires the piece again. Alice Hagen, for example, used blanks imported from France, Britain, Bavaria and Japan, among other countries. She worked in her own professional studio at the corner of Barrington and Sackville Streets in Halifax. In the late 19th century only a few women worked as professionals in china factories such as those operated by Wedgewood and Doulton. Most industrial or commercial china painters were men. 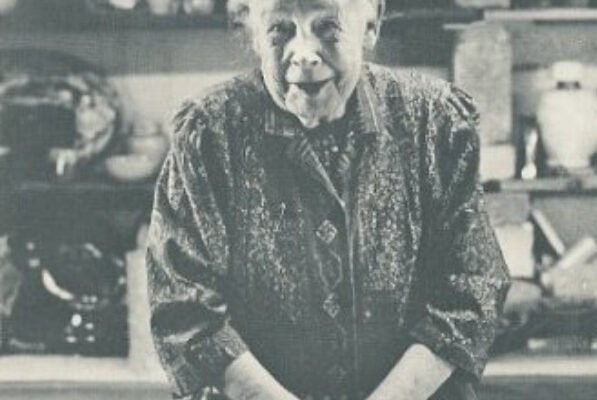